« be very strangely confused (no subject) »
An amazing thing has happened. First, a picture: 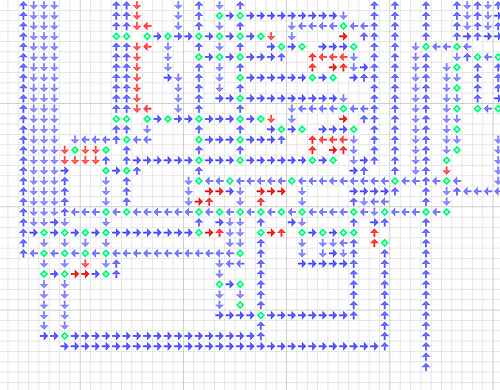 This is a closeup of a machine. It was designed 60 years ago by John von Neumann (who, you know, also invented the computer). Those arrows are like wires, passing signals along in the direction shown. Other symbols do different things like switching and storage. It's not a physical machine of course but an abstract one, a cellular automaton.

His aim was to make a machine that could make of copy of itself (or anything else, like a flower). If we zoom out a bit you can see the whole thing. We were looking at a section near the bottom. 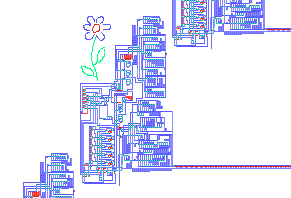 The machine has a tape of instructions going off to the right - the red and blue line. You can also see bits of two other copies in the image. The one in the lower left is the grandmother, the one that made the central one. The one in the top-right is the grand-daughter, the one that the central machine has itself made. It works! It copies itself, just like biological cells do, and with a comparable level of complexity.

But von Neumann never got to see his machine working. He died in 1957. The machine was so complex it wasn't until 1994 that anyone even made a fully worked-out implementation. But those people had never seen it working either, when they published, because the machine was *still* too big to run. It needs a grid that is 145,000 pixels wide, and takes 63 billion timesteps, with tens of thousands of cells active in every timestep. I tried running it a few years ago: after a week of processing it had got a tiny fraction of the way through. Running at a thousand timesteps per second (I was proud to get it going that fast!) it would have taken over 2 years.

But last year someone suggested applying the 'hashlife' algorithm to it, a clever way to take advantage of the repetition in the processing. I even played a tiny part in this - forwarding the suggestion to the programmers on the Golly project. And thanks to their amazing work we can now for the first time run the machine in full. And it only takes a few minutes, which is a miracle in itself. Von Neumann would have loved to see it.

For more details, and to see why there's a flower in that image, see here: [1]