« The triakis truncated tetrahedron fills Post »
There are several interesting tilings in 2D, even if we restrict ourselves to single symmetric convex tiles:

But in 3D? Until a few days ago I was familiar with only one - the cubes. I knew that none of the other Platonic solids filled space.

With help from Adam Goucher I have now learned about three more space-filling polyhedra: 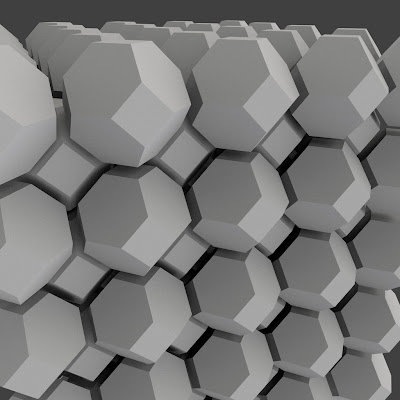 Thought for a long time to be the densest foam, only beaten in 1993 by the Weaire-Phelan structure (but that uses two different cells). 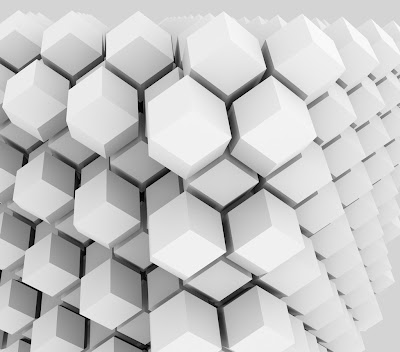 Rhombi have some very interesting properties. 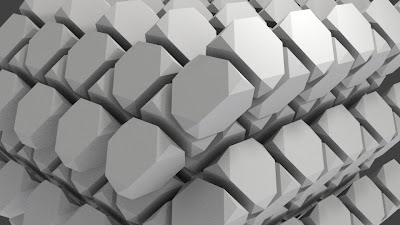 The Voronoi cells of the carbon atoms in diamond are this shape. It's the closest we get to packing regular tetrahedra. It seems that this shape is under-appreciated - there are only a few references to it on the web, and no Wikipedia page yet.

There are other honeycombs but arguably none are as simple or as pleasing as these. The others either use prisms, cells based on prisms, multiple shapes or irregular shapes.

My reason to be interested in this family is that they are the most accessible for running cellular automata on, because each cell has the same shape and the same number of face-neighbors: 14, 12 and 16 respectively. The next version of Ready (0.5) will support polyhedral grids and will have generators for these three.

(The top three renderings were made by exporting VTU files from Ready, applying the Shrink filter in ParaView, then importing as X3D into Blender and rendering with the new Cycles engine.)