Tim Hutton - 2014-11-14 15:33:11+0000 - Updated: 2014-11-14 15:33:11+0000
Originally shared by Andrew DavisonWe are happy to announce the public release of SLAMBench, which is a new open source SLAM software framework with multiple language (CUDA, OpenCL, OpenMP and C++) implementations of the KinectFusion algorithm within a standardised evaluation harness. SLAMBench is a software framework that supports research in hardware accelerators and software tools by comparison of performance, energy-consumption and accuracy of 3D dense SLAM in the context of a known synthetic ground truth from the ICL-NUIM dataset. SLAMBench is an output of the PAMELA project collaboration between Manchester, Edinburgh and Imperial College which brings together researchers in computer vision, software performance optimisation, compilers, runtime systems and computer architecture to work on how algorithms, programming tools and architecture must surely co-evolve as processors become increasingly multi-core and heterogeneous, particularly under the power constraints imposed by mobile applications.

Get the code and more information here:
http://apt.cs.manchester.ac.uk/projects/PAMELA/tools/SLAMBench/

A paper with full details on SLAMBench is available from arXiv:
http://arxiv.org/abs/1410.2167 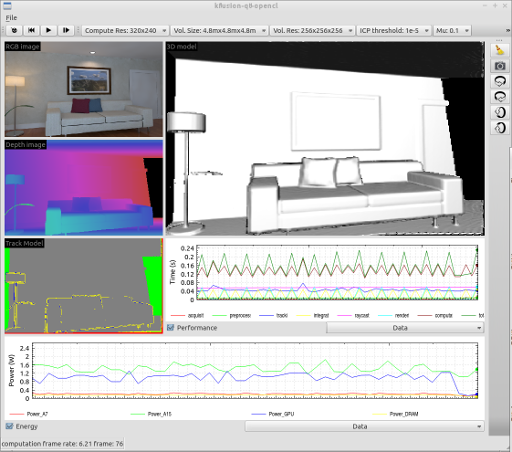